European construction is growing well on the back of low interest rates, good economic growth and pent-up needs. Economic growth is expected to remain solid, unemployment will decrease, exports will grow, interest rates will remain low and the confidence of consumers and business and industry in the future is high. Thus, tax revenue will increase allowing e.g. increasing investment in public construction, transport networks and other infrastructure. Urbanisation, immigration and internal migration, and ageing of the population are other important factors from the viewpoint of construction.

Growth continues but at a slower pace

Despite growth, the volume of construction is below the 2007 level

European construction has seen large fluctuations in the last 10 years. After the financial crisis, construction contracted for five years and turned to growth in 2014. This is the fifth consecutive year of growth. As growth is expected to continue also in 2019 and 2020, the sector is in for a seven-year growth streak. The rise from the 2013 low has, however, been slow and the volume of construction in the EUROCONSTRUCT area will still be 14 per cent lower than in 2007.

Considering the unhealthily high construction volumes of a few European countries before the financial crisis and the very powerful collapse, the volume of construction can be said to reach the 2007 level this year. A similar phenomenon has occurred in the U.S. – a multi-year collapse followed by a long period of growth. There construction turned to growth in 2011 and will reach the pre-financial crisis record level of 2006 after a few years..

Construction growth is slowing strongly in the Nordic countries

Sweden and Finland are responsible for the Nordic slowdown. In 2018–2020 the average growth in these countries will be around zero. Growth will be fastest in Norway (3.4% p.a.) and continues at a reasonably good rate also in Denmark  (2.5 % p.a.).

Nordic growth and decline depend mainly on new housing construction

New non-residential, civil engineering and renovation are the sectors of construction that will continue to grow in the Nordic countries in 2018–2020.

Of the three, the outlook is best for civil engineering construction. It is experiencing truly rapid growth in Norway and is brisk also in Sweden. Average Danish growth is around zero and Finland’s growth appears to be entering negative territory.

The fluctuations in renovation are small compared to new construction. Growth will continue in the Nordic countries until 2020 at an annual level of 1.5–2 per cent. The outlook is best in Denmark and weakest in Sweden..

The number of housing starts in the Nordic countries was 108,000 in 2014. It reached 180,000 units last year, meaning growth of 67 per cent. Finland, Sweden and Norway are building the most new dwellings in Europe measured by units per 1,000 people. Other active builders are Austria, Switzerland and Ireland.

Last year was a record Nordic year, and the number of starts is forecast to drop by over 20,000 units this year. Only the Danish forecast is positive for this entire decade. The Swedish and Norwegian forecasts for this year are -15 per cent and Finland’s forecast is nearly as bad. Negative growth is predicted for Finland and Sweden also in the next two years. Starts are expected to start growing again in Norway in 2020.

Norwegian and Swedish housing start forecasts have been revised down strongly since the end of last year. The EUROCONSTRUCT forecast in November predicted that starts would drop 6 per cent in the Nordic countries this year, but they have already fallen nearly 12 per cent. The increase and decrease in starts depends mainly on starts of flats. Starts of 1+2 family houses have also grown, but more steadily. This year will be a record year for these buildings. Starts are forecast to decrease in 2019 and 2020. Fluctuations in this sub-sector are biggest also in Norway and Sweden as will be the contraction in 2019 and 2020. Development in Finland and Denmark will be steady compared to those countries. 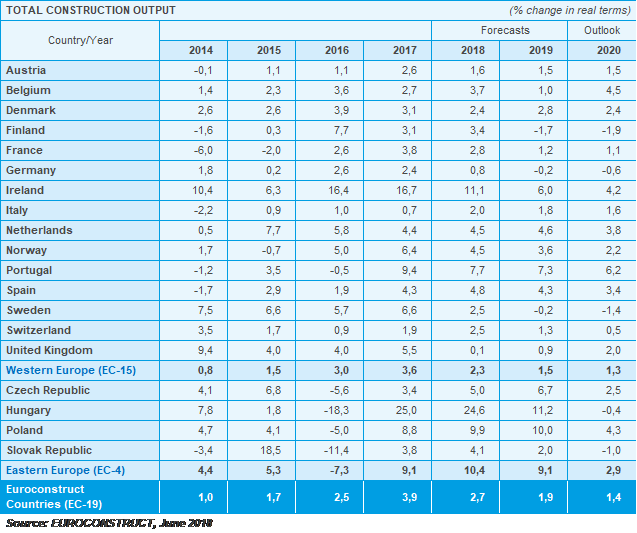